What Buhari must do to Fulani herdsmen – Middle belt makes demand

What Buhari must do to Fulani herdsmen – Middle belt makes demand 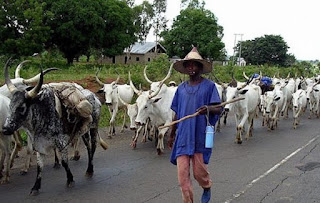 The Middle Belt Forum, on Monday, accused Fulani herdsmen of committing genocide against fellow Nigerians in the country.
President of the Middle Belt Forum, Dr Brutus Pogu, called on President Muhammadu Buhari to proscribe herdsmen.
This is following series of attacks by alleged herdsmen on innocent Nigerians.
We recalls that Enugu Catholic Priest, Rev. Fr Paul Offu, Parish Priest of St. James Greater Parish, Ugbawka in Nkanu East Local Government Area was killed by yet to be identified armed men along Ihe-Agbudu Road in Awgu Local Government Area of the state on Thursday, Aug. 1.
Pogu accused herdsmen of committing genocide on the middle belt people and hiding under the aegis of Miyetti Allah Breeders Association.
Dr Pogu made this known on Monday at a one-day ethnic nationalities conference of the middle belt forum themed “The Reawakening,” Channels Tv reports.
“The Federal government is making attempt to change the narrative by describing herdsmen as bandits but they are Fulani herdsmen.
“They are committing genocide and hiding under the aegis of Miyetti Allah Breeders Association, therefore call for prescription,” he added.
On the issue of land bill, Dr Pogu called for the rejection of what he described as a bill to take away ancestral land from middle beltans for government use.