Overview Of: Tonto Dikeh Reacts To Beating Of Exposed Beggar In Ebonyi State (See What She Said)

Tonto Dikeh has condemned the violent treatment of a fake beggar caught in Abakiliki, Ebonyi state.

The man, pretending to be an accident victim, was exposed when a Good Samaritan offered to take him to the hospital to treat his wounds but he declined.

Further investigation showed that his bandaged limbs were just for show and nothing was wrong with him. See the post HERE

The fake beggar was severely beaten after he was exposed and the video was shared online.

Actress Tonto Dikeh took to @LindaIkejiBlogOfficial on Instagram to condemn the beating. She went on to blame the government for the situation of the country that pushed the man to resort to deception in order to make money. 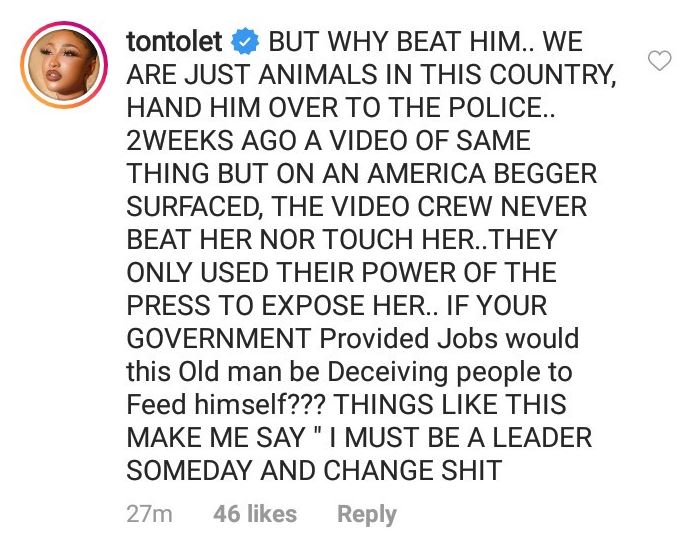 BUT WHY BEAT HIM.. WE ARE JUST ANIMALS IN THIS COUNTRY, HAND HIM OVER TO THE POLICE..2WEEKS AGO A VIDEO OF SAME THING BUT ON AN AMERICA BEGGER SURFACED, THE VIDEO CREW NEVER BEAT HER NOR TOUCH HER..THEY ONLY USED THEIR POWER OF THE PRESS TO EXPOSE HER.. IF YOUR GOVERNMENT Provided Jobs would this Old man be Deceiving people to Feed himself??? THINGS LIKE THIS MAKE ME SAY ” I MUST BE A LEADER SOMEDAY AND CHANGE SHIT