Ukraine has rejected a Russian military ultimatum offering people in the besieged city of Mariupol safe passage out of the port if they surrender by 5am Monday, March 21.

Under Russia’s proposal, civilians would be allowed to leave if the city’s soldiers laid down arms.

But Ukraine has refused the ultimatum saying it’s territorial integrity is out of the question and it won’t be surrendering the strategic port city.

Residents of Mariupol have endured weeks of Russian bombardment resulting in no electric power or running water as around 300,000 people are believed to be trapped there with supplies running out and aid blocked from entering.

Details of the Russian proposal to surrender were laid out on Sunday by Gen Mikhail Mizintsev, who said Ukraine had until 05:00 Moscow time (02:00 GMT) on Monday morning to accept its terms.

Under the plans, Russian troops would have opened safe corridors out of Mariupol from 10:00 Moscow time (07:00 GMT), initially for Ukrainian troops and “foreign mercenaries” to disarm and leave the city.

After two hours, Russian forces say they would then have allowed humanitarian convoys with food, medicine and other supplies to enter the city safely.

Russian Gen Mizintsev admitted that a terrible humanitarian catastrophe was unfolding in Mariupol and said the offer would have allowed civilians to flee safely to either the east or west.

“There can be no question of any surrender, laying down of arms,” she was quoted by Ukrainska Pravda as saying.

Also, Pyotr Andryushenko, who is an adviser to the mayor of Mariupol, vowed the city’s defenders would fight on.

“We will fight until the last of our soldiers,” he said.

“When they [Russian forces] say about humanitarian corridors, what do they really do? They really force evacuate our people to Russia,” Andryushenko said. 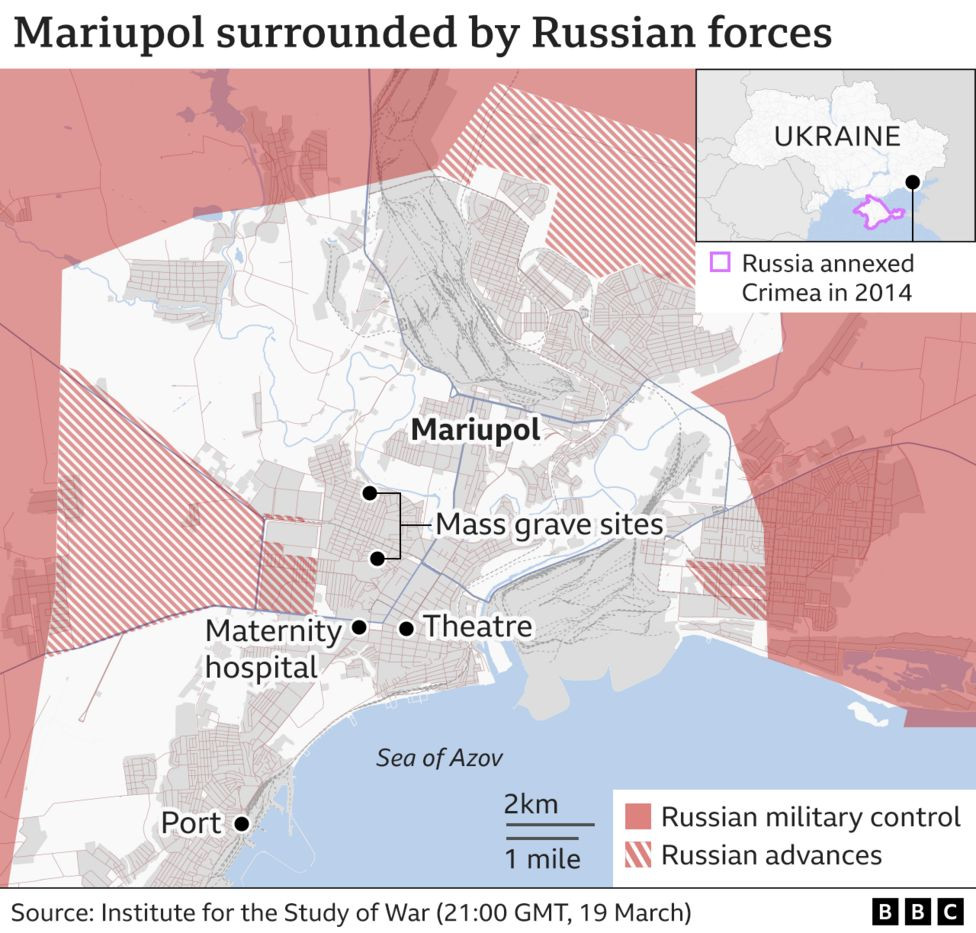 Mariupol is a key strategic target for Russia as it would help create a land corridor between the eastern regions of Donetsk and Luhansk, controlled by Russian-backed separatists and Crimea, which was annexed by Russia in 2014.

According to estimates, 90% of the city’s buildings have been damaged or destroyed in attacks since the war began three weeks ago, and authorities say at least 2,500 people have been killed although the true figure may be higher.

Last week Russian forces destroyed  a theatre where more than 1,000 people were sheltering, while an arts school with 400 people inside has also been attacked.

President Volodomyr Zelensky has said the Russian siege amounts to a “war crime”.

“This is a totally deliberate tactic,” he said. “They [Russian forces] have a clear order to do absolutely everything to make the humanitarian catastrophe in Ukrainian cities an ‘argument’ for Ukrainians to cooperate with the occupiers”.