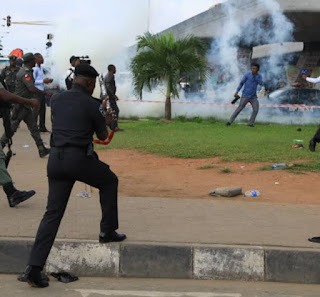 Civil society organizations and members of #RevolutionNowmovement have vowed to continue the protest on Tuesday after Monday’s march was characterized by harassment and arrests of participants by security agencies.
In Lagos, the police fired tear gas at protesters and arrested over 10 persons in the process.
The development caused panic in most parts of the city with human and vehicular movement affected by the situation.
The decision to resume the protest on Tuesday was reached after members of the movement converged at another venue.
Kunle Wizeman Ajayi, one of the leaders of the movement, said they would not be deterred and will continue to press their demands for a better Nigeria.
He said, “We have just begun. President Muhammadu Buhari should know that his bullets couldn’t stop us because Nigerians did not vote for him to shoot them.
“The protest would continue tomorrow (Tuesday), we will relocate the venue and inform our people.
“On this note, we are demanding the immediate release of Sowore, Sanyaolu Juwon, and all others arrested at the scenes of the protest across the country.”