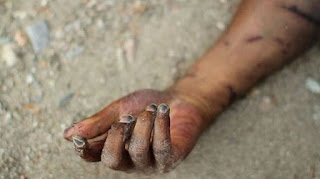 Overview Of: OMG!! Woman Beheads Her Own Mother, Leaves her Head Outside Their Neighbor’s House

In what will come across as a really shocking development, a woman has cut off her mother’s head before leaving the head outside a neighbor’s house.

It has been reported that a woman in Australia has been charged with murder and has been sent for a medical assessment after she allgedely decapitated her mother and left the head outside a neighbour’s house.
According to the Agence France Presse, AFP, police said the body of a 57-year-old woman was found inside her Sydney home on Saturday night, in what they described as one of the “most horrific” crime scenes they had seen.
The woman’s 25-year-old daughter was arrested in the front garden of a neighbour’s house after allegedly putting her mother’s head on the footpath outside, the Daily Telegraph newspaper reported.
National broadcaster ABC said the accused woman appeared in Parramatta Bail Court via video link on Sunday, telling the court she needed medical attention.
The woman has been sent to the hospital for medical assessment, police confirmed to AFP.
She did not apply for bail, ABC added.
Officers said a four-year-old relative witnessed the incident and was treated in hospital for a minor head injury before being returned to his family.
Detective Superintendent Brett McFadden said officers who attended the crime scene had been offered professional support.

“While police are trained to respond to all types of situations, there’s no getting away from the fact this was a horrific attack,” he told reporters in Sydney.
“This is up there with one of the most significant, most horrific scenes police have to deal with.”