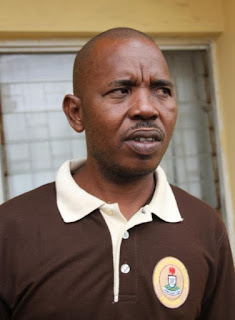 The Economic and Financial Crimes Commission (EFCC), Lagos Zonal office, has arrested a Nigeria Immigration Service officer, Mr Adebimpe Kehinde, for his alleged involvement in passport racketeering.
EFCC acting spokesman, Mr Tony Orilade in a statement in Abuja on Thursday said that Kehinde works as an Immigration Assistant.
According to Orilade, Kehinde was arrested alongside 14 other suspects following intelligence reports received by the Commission.
The suspects were Nnadika Timothy, Oyeyiga Samuel, Sunday Adekunle, Lola Kadoso, Adebayo Damilola, Adeola Oluwafikayomi Ajiboshin, Abubakri Adebayo.
Others were Uka Ifeanyi, Raph Emeka Ibuaku, Henry Onyebuchi, Christy Odey, Aba-Peter Blessing,Ogunmefun Oluwanishola and Busayo Balogun.
Orilade said that the suspects allegedly conspired to extort money from unsuspecting members of the public applying for international passports.
He said that items recovered from the suspects at the point of arrest were five laptops, mobile telephones and several official documents.
“They will be charged to court as soon as investigations are concluded,” he stated.