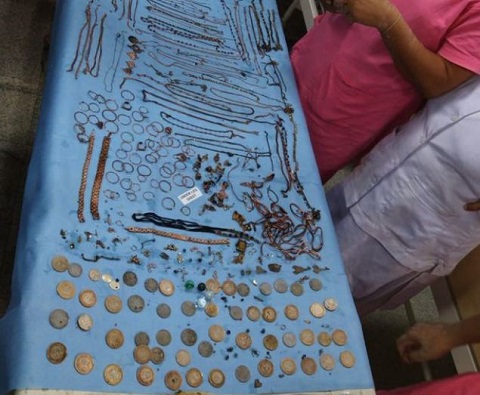 Overview Of: Doctors Remove Hundreds Of Coins And Jewellery Worth N24million From Woman’s Stomach (Photos) 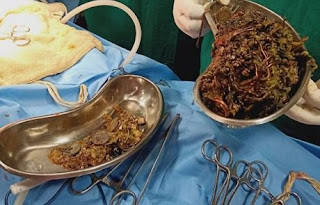 Runi Khatun, 22, was rushed to hospital ‘weak and emaciated’ on July 16 after she had started to vomit following every meal.
Baffled doctors in West Bengal, India, discovered the young woman had a hoard of items inside here after a scan – including 69 chains, 80 earrings, 46 coins, eight lockets, 11 nose rings, five anklets and one watch dial.
According to Runi’s mother, gold items and ornaments had recently started to vanish from the family home.
The mum said she had no idea her daughter had been swallowing the items.

She also said the coins consumed were likely to have come from her brother’s shop.
She said when Khatun was confronted about the missing items, she would cry – but never revealed they had been swallowed.
Her family said: “We noticed that the ornaments were disappearing. But whenever we questioned her, she started crying and revealed nothing.”
The woman’s mother added: “Despite keeping an eye on her, she somehow managed to swallow all these objects. She was not well for the past two months.
“Before admitting her at the Rampurhat Government Hospital, we had taken her to various private doctors and she was on medication without any result.”
Medics said most of the items were made of copper and brass.
Dr. Siddhartha Biswas, head of the surgery department at the Rampurhat Government Medical College and Hospital, said the patient was ’emancipated’ and could not eat food.
He said: “The patient looked weak and emaciated at the time when she was admitted to the hospital.
“Her albumin and haemoglobin count were so low that we could not perform an operation soon.
“Her condition was so critical that she required at least five bottles of blood.
“She could not even intake food physically so we had to administer Total Parenteral Nutrition (TPN) to artificially inject food through her mouth.”
The operation to remove the items lasted around an hour and 15 minutes.
After 1.6kg mass of metal was removed from her stomach, doctors separated each item before laying them on a table to reveal the shocking amount she had swallowed. Medics said her condition is now stable.