Overview Of: Biodun Fatoyinbo: We stand by you, your church will continue to march forward – CAN 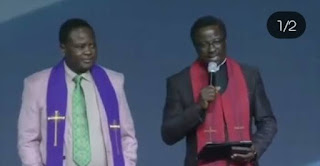 Biodun Fatoyinbo: We stand by you, your church will continue to march forward – CAN (video)

– Representatives of CAN have pledged support for Pastor Biodun Fatoyinbo of COZA
– The representatives who visited the church to show their support said they believe COZA will come out stronger from the issue it is facing
– Addressing the congregation, one of the representatives declared that the gate of hell shall not prevail against the church
Representatives of the Christian Association of Nigeria (CAN) visited Commonwealth of Zion Assembly (COZA) to show support to their head pastor, Biodun Fatoyinbo, over the r*pe allegations levelled against him by Busola Dakolo.
In a video that has gone viral online, the COZA representatives said that an attack on COZA is same on the church and they would not stand by to let that happen.