Twitter CEO, Jack Dorsey experienced a major security breach affecting his Twitter account in the late hours of Friday, August 30th, as his account was briefly taken over by a group of hackers known as the Chuckling Squad .

Offensive tweets which include racial slurs, antisemitic messages and at least one Holocaust denial were tweeted out by the hackers in 10 minutes of being in control of Dorsey’s account.

Jack Dorsey‘s unauthorized tweets were broadcast to more than 4 million users and sent Twitter into a frenzy, with many actively tagging Twitter Security and Twitter Communications, hoping to alert them to the problem.

Few minutes after the hack, Twitter tweeted that “the account is now secure, and there is no indication that Twitter’s systems have been compromised.”

Dorsey’s cell carrier reportedly gave the hackers control of the account. Twitter said that “the phone number associated with the account was compromised due to security oversight by the mobile provider,” which apparently allowed the hackers to send the tweets using text messages. 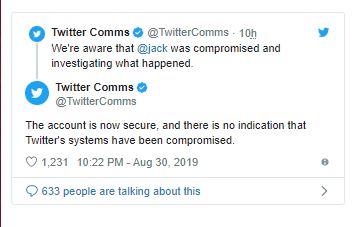