DO YOU AGREE? Rapper AKA Caused This Ongoing Xenophobia In South Africa (See Details)

Download DO YOU AGREE? Rapper AKA Caused This Ongoing Xenophobia In South Africa (See Details)

DO YOU AGREE? Rapper AKA Caused This Ongoing Xenophobia In South Africa (See Details) Some months during the Nations cup when Nigeria trashed South Africa 2-1, Nigerians are been killed terribly in South Africa.

Well, immediately after the Match, popular South African rapper AKA tweeted some damaging tweets about Nigerians, he showed how much hates brew inside of him and this might have triggered the gullible and insecure South Africans to start attacking Nigerians.

In case you missed the News back then, click on the link below to read it 👇

See what AKA tweeted back then below:- 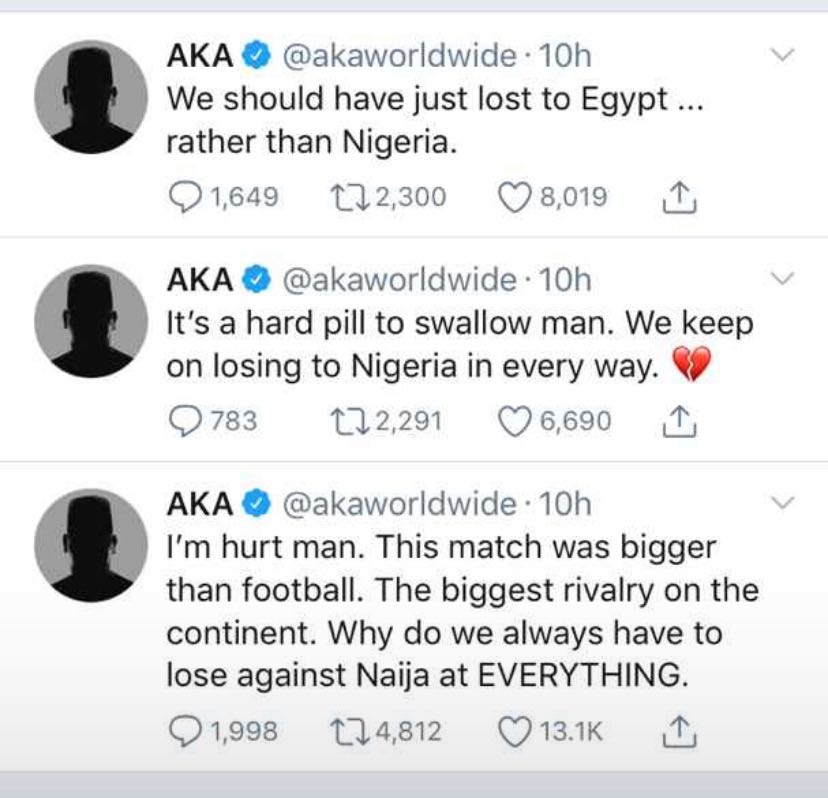 Fast forward to now, South Africans are already attacking Nigerians which has led to the loss of so many lives already 😢😢

In fact, Ycee even accused AKA of indirectly causing the ongoing Xenophobia, CLICK HERE to see what Ycee tweeted.

I remember blaming AKA for Tweeting those rubbish some months back but many people said it is nothing serious but today, you all can see what is happening in South Africa already.

Guys, we have a question for you all 👇

Do you Think AKA Should Be Blame For The Current Xenophobia Attack?

let’s hear from you as regards this very serious issue.