Men of the Ogun State Police Command on Saturday arrested three armed robbery suspects, who they said “have been terrorising motorists along Odogbolu/Ijebu-Ode express way.”

The police gave the names of the arrested suspects as: Johnson Afokolu, Victor Michael and Jacob Usang.

A statement signed by the Ogun State Police Public Relations Officer, Abimbola Oyeyemi, revealed that the suspects were arrested when policemen attached to the Odogbolu division were on patrol of the highway around 6am.

According to Oyeyemi, the policemen sighted the men placing themselves in an ambush manner along the highway. 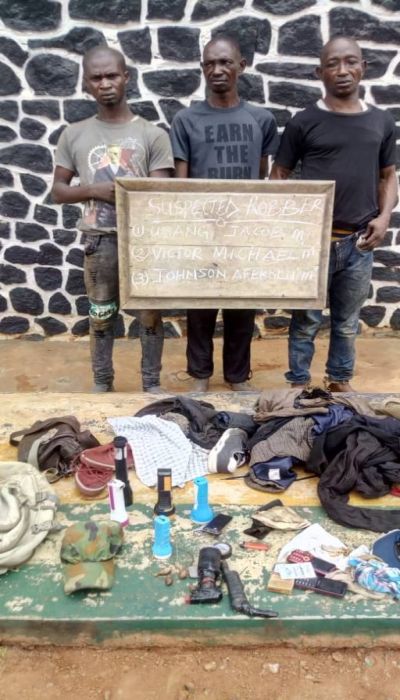 They were said to have taken to their heels on sighting the policemen, “but they were hotly chased and apprehended.”

They had, upon interrogation, confessed to being responsible for most of the robbery cases in the area and that other members of their gang always joined them on special operations.

“Meanwhile, the Commissioner of Police, CP Bashir Makama, has ordered the immediate transfer of the suspects to special anti-robbery squad for discreet investigation.

“He also ordered a massive manhunt for the remaining members of the gang in order to ensure sanity along the express road,”