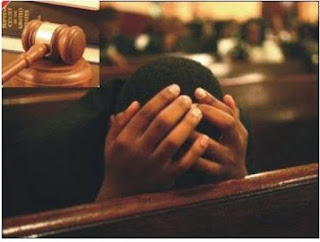 Overview Of: 29-Year-Old Man Lands In Court For Allegedly Raping A 9-Year-Old Girl In Lagos

An Igbosere Magistrates’ Court in Lagos on Thursday remanded a 29-year-old man, John Edet, in prison for allegedly raping a nine-year-old girl.
The Magistrate, Mrs K.O. Doja-Ojo, who did not take the plea of Edet, ordered that the case file should be duplicated and sent to the office of the Director of Public Prosecutions for advice.
Doja-Ojo adjourned the case until Aug. 14 for mention.
Edet, whose address was not provided, is standing trial on a charge of defilement.
Earlier, the Prosecutor, Insp. Peace Chukwudi, told the court that Edet committed the offence on July 9 at 4:00pm at Ilasan community in the Eti-Osa Local Government Area of Lagos.
Chukwudi said that the defendant unlawfully had sexual intercourse with the girl.

“The girl complained of pains in her vagina and told her parents that the defendant has been having carnal knowledge of her whenever they were not around,” the prosecutor said.

Chukwudi added that the offence contravened Section 137 of the Criminal Law of Lagos, 2015.
The News Agency of Nigeria (NAN) reports that Section 137 provides life imprisonment for offenders.