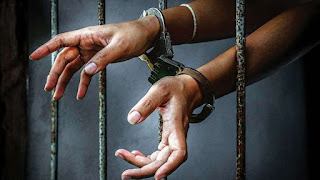 Overview Of: 23 Years Old Man Lands in Prison for Stealing A Phone in Osun State

One 23-year-old man named Aluko Adebayo has been remanded in prison by an Osogbo Chief Magistrates’ Court in Osun, on Tuesday, July 16, 2019 for alleged theft of a Tecno phone.
Aluko, whose house address was not given, stole a Tecno J8, belonging to one Felicia Isaac.
The defendant, who had no legal representation, pleaded not guilty to the offence.
However, Mrs Rofiat Olayemi, the magistrate had ordered the remand of the defendant in prison custody due to the magnitude of the alleged offence.
The prosecutor, Insp Rasaki Olaiwola, earlier told the court that the defendant committed the offence on July 15 at about 8 a.m. at Ogidan area, Oke-Baale, Osogbo.
He told the court that the police arrested the defendant when the cell phone was traced to him.

“The accused used a stick and scissors to cut the net of the room where the phone was kept.
“The value of the stolen phone according to the owner is worth about N35,000”.

He said the offence contravened Section 390(9) of the Criminal Code, Cap 34, Vol. 11, Laws of Osun, 2003.
The magistrate, however, adjourned the case to Aug. 12 for consideration of bail application.